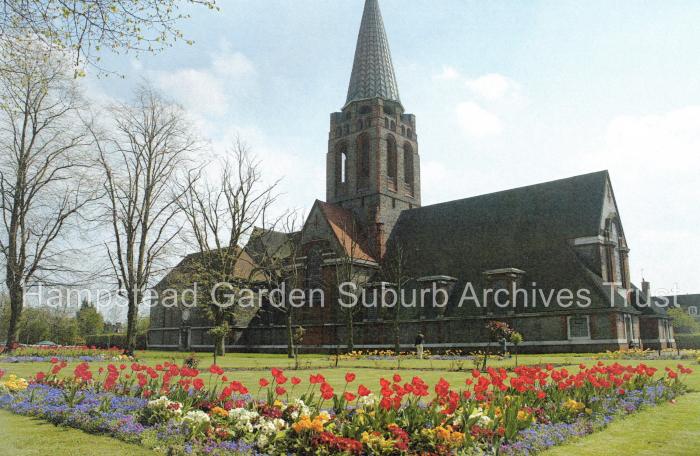 Friday 8 May 2020 marks the 75th anniversary of VE Day and we had planned to host a deanery service at St Jude’s this Sunday afternoon. The Corona pandemic of course makes that impossible.

Victory in Europe is only briefly mentioned in the St Jude’s Gazette for 1945.  The parish magazine, which had once been a substantial weekly, had by then been reduced to a slender monthly.  It seems that wartime censorship extended even into such local publications, and very little is said about the war other than brief reports of lost or missing parishioners serving with the forces.  The invasion of Europe following D Day in June 1944 receives no direct mention until September when it is announced that “the King has bidden his people to join in corporate prayer for the welfare of the Allied Nations and ultimate victory . . . [as] the great news of our victories sweeps in . . . “.

That same month a new book by the Vicar, the Rev W. H. Maxwell Rennie, and Mr L. D. Gibbin, “a valued member of the St Jude’s congregation”, entitled Our Men Returning is announced (Evans Brothers 1/6).  “Detailed suggestions are given for contacting men and women returning from the Forces and from Industry, and for using their individual talents in the service of the Church.” The cover (“in two colours”) evidently carried a picture of Fr Rennie (we have no copy in our archive),as the reviewer (in the same edition of the Gazette) described it as “a mistake; it should have been a symbolical, or at least impersonal design. The incumbent, say, of Nether Wallop, to take a basic example, will think of his own flock returning and not of them being welcomed by the Vicar of St Jude’s”.

Some things could not be censored.  The summer of 1944 saw the beginning of the ‘doodle bug’ (V1 flying bomb) attacks. These put an abrupt end to the recently reinvigorated children’s activities inaugurated by a new curate, Father John Knight, who had arrived only that June. ‘Doodling’ had caused not inconsiderable damage on the Suburb, and the church had served as a refuge for local residents and for furniture from their bombed-out houses. “Censorship will not allow us to say more [but] the St John’s Chapel is a very safe sleeping space . . .”.  We read also (in July) “that by the time this appears in print our scientists, one of whom is well known to St Jude’s, who deal with Nazi machinations, will have gone a long way to solving the problem of the ‘Buzz-Bomb’”.

In September 1944 the St Jude’s Director of Music, Charles Proctor, under the heading ‘Wohin? (Wither?) The purpose of music is to teach (Wagner), offered a lengthy essay, a “psychological study of German obsessions’, in which he suggested “the age in which we live can best be explained as a projection of the myth-laden mind of the rulers of Germany. If one considers for a moment the condition of Germany under Nazi rule, as but a projection of the [Wagnerian version of the] Nibelungen Saga upon its generation, one can perhaps attune oneself to the inconsistencies of the regime and even perhaps foretell its doom. . . What is the end of the story? ‘Gotterdammerung’. The Twilight of the Gods . . . Had the leaders of Germany learned from their great dramatic poet, Wagner, instead of glorifying him, they might have hesitated before setting out to emulate these primary legendary figures, without first considering the end of the story”.

In a more mundane note in November, thanks are offered to “those who responded to our request for knitted garments for Liberated Europe”.
Early 1945 editions of the Gazette make little mention of the war.  In April a short series of Sunday evening addresses by distinguished speakers is announced. These include Sir Stafford Cripps, the Minister of Aircraft Production, and C. S. Lewis.

Victory in Europe is finally announced in the Gazette of June 1945.  A Thanksgiving Mass had been held on VE Day itself when the choir and orchestra had performed Schubert’s Mass in B Flat and the church was filled from end to end.

The vicar announced that he was under doctor’s orders to take a month’s rest. “One of the more tiring elements in my daily duties – the constant cycling uphill back to the Vicarage, for I could not have managed my job walking about the parish – will in future be abolished through the kindness of a parishioner who has presented me with a New-Hudson Autocycle.”

In July we learn that the altar ornaments (gold and rock crystal crucifix and candlesticks by Lutyens) and the stained-glass window (by Robert Anning Bell) from the St John’s (Harmsworth Memorial) Chapel have been stored “somewhere in England” and are about to be returned.

There was a strong recognition that the ‘Japanese War’ had not yet ended and that the time for the resumption of normal duties and family reunions was ‘not yet’.