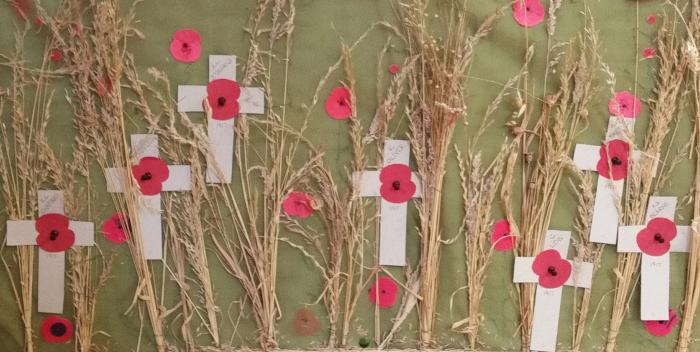 Most of the key public buildings had been erected by 1914: The Free Church, St Jude's on the Hill and The Institute. Included among these public buildings was the Club House, the young Suburb’s community centre, which  was opened in 1909. It offered a wide range of facilities including a gym, library, games room and meeting halls. It was the epicentre of activity on the Home Front in the Suburb during the Great War:  from 1914-15 it served as a reception centre for Belgian Refugees and from 1916-19 it served as an Auxiliary Military Hospital.  The Club House put in sterling service during the First World War. It is ironic that it survived that conflict intact only to be wrecked by a German landmine in 1940.

Volunteering was undertaken on an almost industrial scale in the Suburb. Residents were caring for Belgian refugees, staffing the Garden Suburb Hospital, sewing, joining the Special Constabulary and filling the ranks of the Volunteer Training Corps. The Great War made great demands on the Suburb, but it also helped to shape its character as a vibrant and caring community.

The Great War, at least on the western front, came to an end on 11 November 1918. Between 1914-18:  more than 40 suburb residents were killed, and many more were injured on active service, the development of the Suburb was halted (the ‘new’ Suburb was built mostly 1922-39), food supplies tightened (in 1917 the Trust was forced to allocate land to allotments), and women played a bigger role in the workforce (the HGS Trust employs more females).

Armistice Day was greeted with a palpable sense of relief in the Suburb.  Residents who had endured four long years of war would have fully shared the sentiment expressed in the St Jude’s Parish Paper of 27 December 1918:
“Small wonder that Christmas Day this year, what with the sunshine and the cessation of war, was the happiest perhaps that we have ever known or shall know”.

The post-war situation is described in more detail in the book HAMPSTEAD GARDEN SUBURB DURING THE GREAT WAR by John Atkin, and the last chapter, War's End, can be read here. The book is published by the Hampstead Garden Suburb Archives Trust and copies may be obtained by emailing suburbarchives@gmail.com.